Keeping documentation up to date can be difficult, and an extra barrier can be if you need extra tools setup "just so" to contribute to the docs. In this post I will give a quick run-through of setting up a devcontainer to help with great markdown editing, PlantUML, C4, and Mermaid diagrams. Another part of the documentation is the use of Architecture Decision Records, which will also be supported by the devcontainer.

I recently setup a devcontainer for out "Patterns and Practices" repository at work. This makes it easy for a developer to jump in and contribute without needing to install the required tools.

In this post I won't be diving into the details of setting up a devcontainer. Instead I will show you what the container setup gives you and then point you toward where you can get it. I will callout the parts of the setup as I demo their results.

This setup uses the following tools:

This will not be a thorough examination of each tool, although I will at least motivate why they are on the list.

I will be starting with a clean VS Code setup to show that the devcontainer is doing all the work. 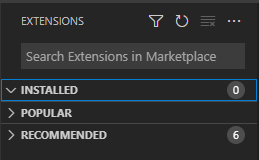 So the first things we need to do is make sure that you VS Code is ready to run a dev container:

That's it! Your VC Code is now ready to run a devcontainer.

The example repository can be found at https://github.com/dburriss/tools-for-arch-docs-example. Either clone this or copy the .vscode and .devcontainer folders into the folder where you will be storing your markdown documentation.

It should prompt you to open in the container but if not bring up the command pallette and choose "Reopen in Container".

Next let's look at the various diagrams available to us.

Graphviz is a fairly low-level drawing language (compared to other diagrams shown later). It uses .dot files to define diagrams.

Hit Ctrl-Shift-v to see a preview.

Graphviz is really powerful and flexible and this is why PlatUML is actually built on top of it, which is why it is included in this list. Personally, I have not used it much for architecture drawings.

It can be useful to generate diagrams dynamically since it is on the command-line.

The next diagram we will try out will be a PlatUML diagram. PlatUML has been around for a while and so supports a wide variety of diagram types.

Pressing Alt-d will bring up the render of the PlantUML diagram.

Pulling up the command pallette with ctrl-p then > allows you to export.

Good to know you can control the expected source and output folders in the .vscode/settings.json file:

PlantUML is useful in the number of standard software diagram it supports. Check out the docs for a a complete list and usage.

C4 diagrams are my goto when I want to explore or change an existing system or plan a new one. The creator Simon Brown had the insight that architecture diagrams should be like maps, and maps have a certain zoom level (show globe vs. country vs. city) and type (topographic vs. political). C4 diagrams have 4 main levels: System context, Container (running applications), and Code. There are others but these are the main ones that give it it's name.

Since it leverages PlantUML, Alt-d will get you a preview. 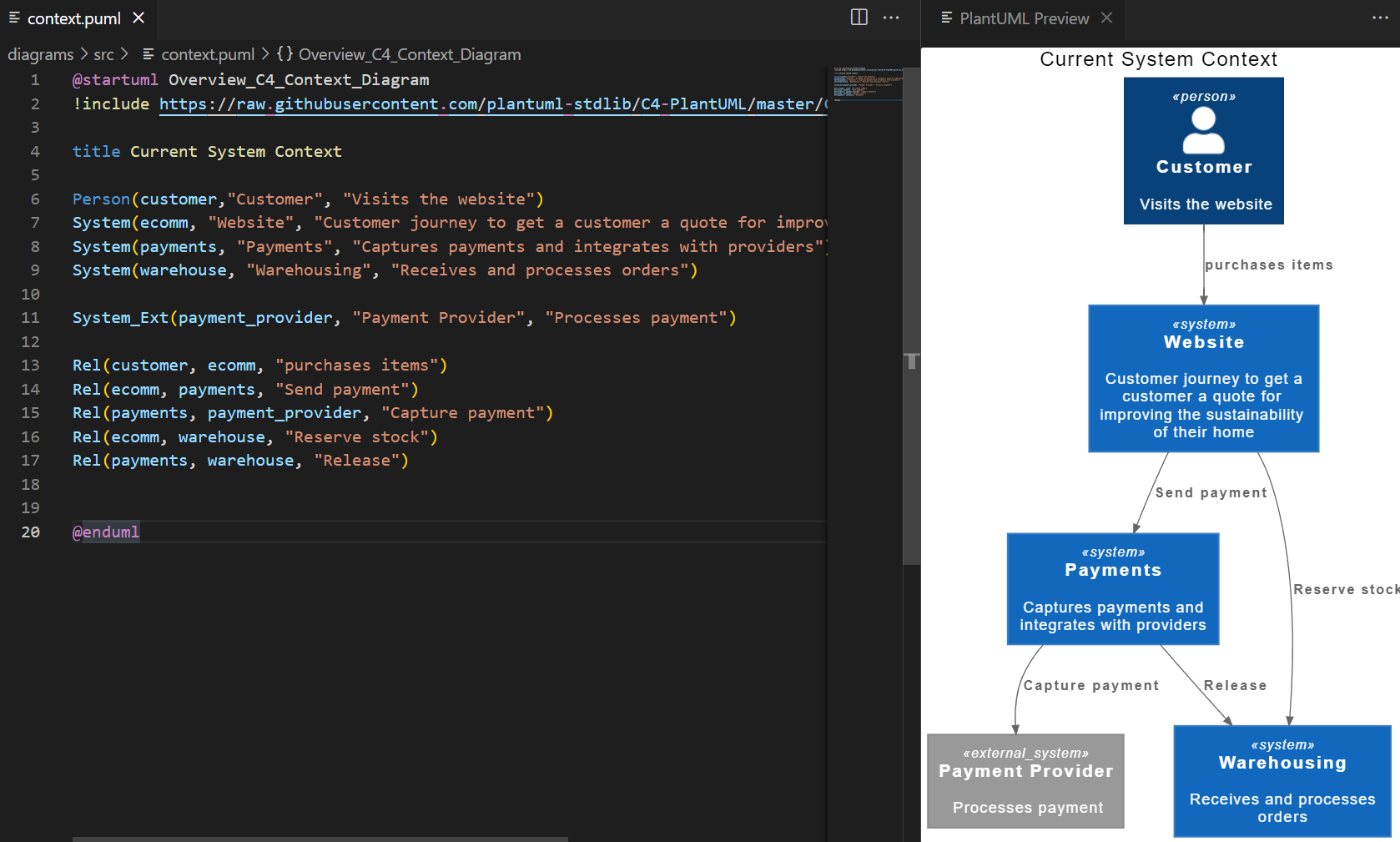 I highly recommend diving into C4. It is a valuable framework for organizing and structural drawing architecture diagrams. I have even experimented with functional modeling and you can judge the result here.

Mermaid is the new kid on the block when it comes to software diagramming. It has some of the usual suspects like Sequence and Class diagrams but then has some new ones like User Journey and Gitgraph diagrams.

It also has some interesting tooling options like being able to embed into markdown via a link to the Mermaid site as well as support menus and links on elements. Of interest if you use GitHub to host markdown, they now support Mermaid in their markdown.

You can also have a standalone file, although I found this is a bit buggy.

I am interested to see what new diagrams Mermaid releases. Hopefully a C4 diagram set!

That is it! What do you think? Using these already? Think you will use them going forward? With the devcontainer it is super easy to get started and give these diagrams a try.

There are a couple things in the devcontainer I have not covered that you may be interested in:

Useful for recording the history of significant decisions made for an application or system of applications. Warning: requires discipline from the team to log decisions.

The Markdown Extension Pack comes with plenty of useful plugins for working with markdown from tables to emojis.

I am not going to dive into it but in the repository there is a script called generate-applications-md.fsx that generates a markdown file with a table of all GitHub repositories in an organisation. If you add 2 specific topics to a GitHub repo, namely team-name and domain-name, it will use these to populate the team name and domain. Usage is in comments at the top of the script.

Here is the list of plugins included in this devcontainer.